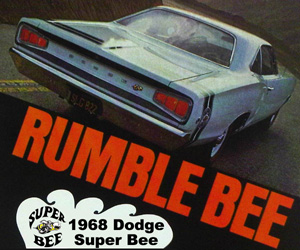 Launched as a budget muscle car, the 1968 Dodge Super Bee retailed at only $3,027. Based on the Dodge Coronet coupe and was powered by a 335 bhp four barrel 383 cid big block V8 with goodies borrowed the 440magnum including cylinder heads, camshaft and induction system. The 426 Hemi was offered as an option, only 125 were built.

The Super Bee featured bumble bee racing strips wrapping around its tail and a power bulge hood. Section contains a collection of featured 1968 Dodge Super Bees submitted by our visitors.

Get your Dodge Super Bee added to this section!